Plasticizers and PVC free closures: the benefits of SoPure®, the future of PT Caps for baby food jars

The latest progress report of The New Plastics Economy Global Commitment 2020 has underlined once again that how plastic is used significantly affects climate change, the loss of natural heritage, and pollution.

The latter particularly affects the oceans, where tons of plastic materials are dumped every year. The growing awareness of multinationals and the desire to consolidate their brand reputation is pushing the giants of the market, especially the food and beverage ones, to safeguard the future of our planet and protect human health.

In 2020, the companies adhering to the Global Commitment reduced the use of so-called "problematic" and non-recyclable materials, small formats, and secondary packaging (such as multipurpose).

The material most commonly identified by companies as having been reduced or phased out in the last year was PVC.

Approximately 38% of packaged goods companies, that have, or have had, PVC in their portfolio, have concrete plans to phase out this material.

For some years now, in the beverage sector, companies have pushed towards more sustainable and PVC free solutions for product packaging.

PepsiCola has changed all SodaStream containers from single-use plastic to metal containers, and it’s also planning to replace PVC shrink sleeves to recycling-compatible ones by the end of the 2021.

For the new bottles of the Beefeater alcohol line, Pernod Ricard, a world's co-leader in the industry of wines, has replaced the caps in polyvinylchloride with aluminum ones with a total reduction of plastic materials equal to 410 tons.

PVC has been subject to restrictions in several countries of the European Union, especially in the case of some products dedicated to children (rattles, teethers, pacifiers and baby bottle nipples) (CHEJ), as well as in the United States, Japan, Iceland, South Korea, and Norway.

This push towards packaging sustainability, already developed in the beverage sector in recent years, has also significantly extended to the food sector (and as we will see, in particular, in the baby food sector).

For this reason, Pelliconi, an innovator in the beverage sector for decades and now a pioneer in the use of PVC-free packaging for baby food, has taken on the global challenge of sustainability, shared by consumers who are attentive to food safety and respect for the environment.

With investments of around 10 billion dollars, the driving force towards innovation in terms of packaging characterizes large food & beverage companies such as Danone and Nestlé, the same ones that have distinguished themselves by introducing a reusable, recyclable, or compostable packaging design at 66-67%. Both giants plan to invest $ 1.06 and $ 2.2 billion respectively by 2025.

In particular Danone delivered improvements to its recyclability percentage through reducing use of polystyrene, and highlighted that its recyclability score will increase when it phases out PVC by 2021; Carrefour plans to do the same by the end of 2021.

The Mars Incorporated, meanwhile, reduced by 17% the use of PVC for a total of 108 tons.

Feinkost Dittmann, the first company to place glass jars with PVC free twist-off closures on the market, have processed millions of PVC-free seals in recent years, showing the effectiveness of these sustainable solutions even with oily foods and fats.

Among the initiatives for recycling and reducing plastic in food packaging, the exponential growth of reusable bags, the spread of food dispensers, and the sale of products such as fruit and vegetables in special plastic-free containers has been confirmed.

The aspect of sustainability is closely linked to brand reputation: publicly making efforts to limit the use of plastic can only benefit the food multinationals that have taken steps to protect the environment.

The driving force for change is also (and above all) recorded in the baby food sector, particularly, in capsules for glass jars.

For some time now, we have been witnessing a strong trend towards the elimination of PVC from packaging, especially from food caps. This is because the seal of the cap itself can contain phthalates, ESBO, bisphenol A (BPA), and plastic substances in an amount that can be attested between 35 and 40%, with a relatively low presence of a polymeric base (60%).

While playing an important role in the closure performance, all these substances may cause a potential migration of harmful substances into foods, especially if the latter have high percentages of fat. 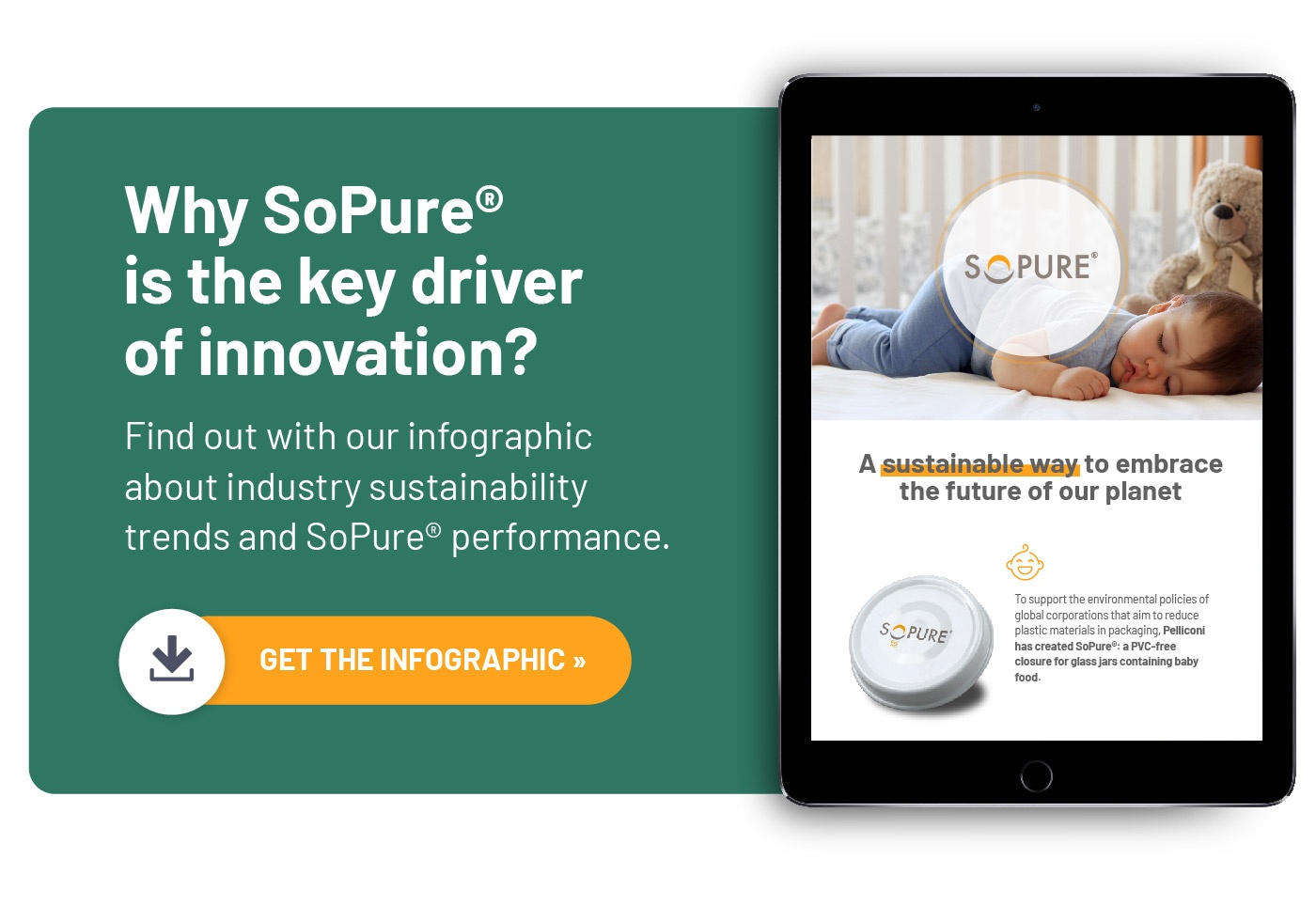 Reseaches have shown that there are few other materials perfectly capable of substituting PVC and that can guarantee an optimal preservation of food and its safety.

Offering safer food, especially in the baby food sector, represents de facto added value, as realities such as DM and Rossmann, who use PVC-free packaging for their baby food products, have well understood. (ProvisionerOnline).

SoPure® caps by Pelliconi, a company that has established itself as an innovator and pioneer in PVC-free solutions for baby food, are a clear example of a sustainable packaging evolution.

SoPure® capsules have a Provalin® seal, a type of sealant that does not contain PVC, plasticizers, and other additives capable of migrating into food.

This liner complies with the criteria of the EU directive 10/2011 and PIM, that establishes an overall migration limit of less than 60 mg/Kg of substances into food.

Featuring a liner composed of more than 95% polymer base, SoPure® does not contain additives such as plasticizers (phthalates or adipates for example), thermal stabilizers (ESBO), capable of dispersing in food.

Since October 2020, Pelliconi has introduced a high tech production line with a current manufacturing capacity of around 40,000 pieces per hour and 300 mln annually.

Lab analysis conducted on SoPure® concerning migration in glass containers of 80 ml and with a 51 mm closure have shown that this revolutionary closure remains well below the declared overall migration limit of 60 mg/Kg, even in the long term.

Due to its chemical composition, the percentage of global migration is lower than PVC and is due to the only lubricant migration, which remains constant over time.

Furthermore, the force required to open the SoPure® capsule is low—the effort is less than 26 pounds per inch—even after months and after, hot filling, pasteurization or sterilization processes.

SoPure® capsule is eco-friendly as it allows a much easier disposal process and makes it suitable for incineration; it also facilitates metal recyclability. If burned in an incinerator, it doesn’t release toxic gases like dioxins in the atmosphere.

The green advantages of SoPure® also extend to the compound production process: less than 38% of CO2 is released into the environment (according to a study by Modern Plastic India), further confirming the eco-friendly footprint of a solution like SoPure®.

SoPure® is the ideal solution to meet the needs of the baby food market, in which attention to the safety and quality of food, particularly to the prevention of its contamination, is in line with the environmental policies of supranational organizations.

SoPure® is also a guarantee for all mothers, who can be sure that the baby food is sealed in such a way that will protect children’s health.

Product Manager of SoPure® closure at Pelliconi. Annabella has a master's degree in Food Science and Technology and experience in food production with a greater focus on packaging. In Pelliconi she is responsible for the development and improvement of SoPure® throughout the Product Lifecycle including: gathering and prioritizing product and customer requirements in terms of materials and performance, defining the product vision, and working closely with engineering, sales, marketing and support to ensure that customer satisfaction goals are met.